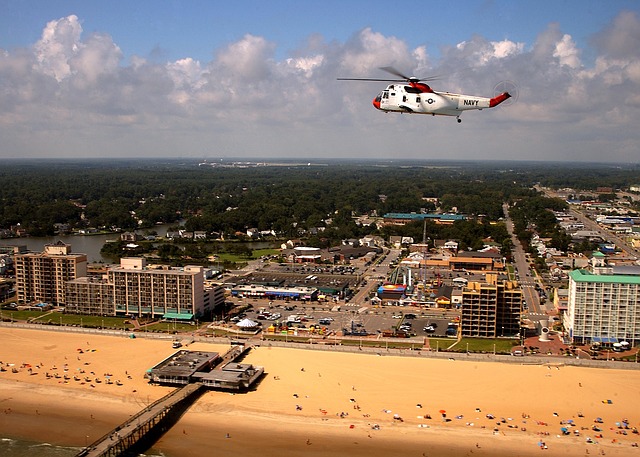 As one of the oldest settlements and original thirteen colonies, Virginia offers up a plethora of ghost stories, and it’s no surprise there are plenty of haunted places in Virginia Beach. A popular resort city with plenty of sun and sand, people flock to Virginia Beach to enjoy a dip in the Chesapeake Bay. Depending on where you go in this sandy sanctuary, you might run into some of the original inhabitants of this beach city, in non-corporeal form. Virginia Beach has some famous local ghosts, as well as some spirits known more widely.

10. The Poltergeist of Portsmouth

A quick twenty-four-minute drive away from the lake shores of Virginia Beach will bring you to the city of Portsmouth, where many decades ago, there was a big story about poltergeist activity in one home. That home is located at 949 Florida Avenue.

Cleveland Tony Harmon lived in that house in 1962, where things got bad for a few days in September. From levitating beds to items being tossed around the house by an invisible being, Harmon and his family experienced it all, as did some of their neighbors.

The waters of Virginia Beach aren’t the only places harboring spirits of the dead. Rumor has it that along the Coast Artillery Road near Fort Story, a ghost often appears in the road before disappearing into the surrounding wetlands.

Fort Story is a military base that was utilized in both WWI and WWII. Being a military base, especially one in operation during wartime, one might expect there to be a ghost or two around. There isn’t much information to be found out there on who the Coast Artillery Road ghost could be, though some speculate it could be a soldier who took his own life.

The inlets and coves along the Chesapeake Bay made it a great hiding place. At a time when pirates roamed the waterways, this area offered them an excellent vantage point for plundering. One pirate known for hanging out along the Bay was Captain Edward J. Teach, aka Blackbeard. While Blackbeard likely wasn’t the only pirate to use these inlets, it was here where the feared pirate hid from the Navy as they hunted him down.

In 1718, the Navy caught up with Blackbeard at Ocracoke, NC, not that far from Virginia Beach’s waterways. Blackbeard died November 22 of that year, at the hands of the Navy, but it’s believed he hid a treasure somewhere along the North Atlantic shoreline. Because one of his usual hiding places was along Virginia Beach, it could be that he hid his treasure there, so some folks believe he returned to the area as a ghost to watch over his treasure.

If you visit First Landing State Park looking to dig for treasure, know that you will need a permit to dig or use a metal detector.

7. The Lookout Tower at the Surf and Rescue Museum

There’s at least one ghost haunting the Lookout Tower at the Virginia Beach Surf and Rescue Museum. Some people believe the spirit seen, or at least felt there, belongs to John Woodhouse Sparrow. He worked at the station tower for 35 years, up until his retirement in 1917. A cutout of Sparrow is displayed in the lookout tower to this day.

There’s a chance that Sparrow’s ghost is accompanied by the spirits of people who lost their lives in shipwrecks along the waters of the Chesapeake Bay. As a beach town, many of the haunted locations tie into possible drownings in the waters.

The late 1600s and early 1700s saw many people accused of witchcraft for various reasons. For Grace Sherwood, her herbal medicine may have been one of the things that caught the eye of her accusers, or it could have been her beauty making the wives of men in the village jealous. She was known as the “Witch of Pungo.”

Whatever it was that made people decide Sherwood was a witch, she was accused of being at fault for the death of livestock, damaged crops, and for conjuring storms. Per the standards in the age of witch trials, it was decided that Sherwood would undergo “ducking,” and if she floated, it meant that she was a witch. Bound, Sherwood was tossed in the water from a boat off Witchduck Point, as it is known today. She managed to unbind herself and float back up, making her guilty of witchcraft. After serving a few years in jail, Sherwood was released and lived to the ripe old age of 80.

There is a statue dedicated to Sherwood standing near where she was tossed into Lynnhaven River’s waters. Some people believe she haunts the area where she was nearly drowned.

Named for the ferry boat service on Lynnhaven River, the original Ferry Plantation House dates back to 1642. It’s also known as the Walke Manor House and burned down in 1828. Later it was rebuilt by new owners. The original building may have been destroyed by fire, but that didn’t remove the ghosts that roam the halls.

Many ghosts have been spotted inside the Ferry Plantation House. There are believed to be at least eleven ghosts in total haunting the plantation. Previous owners, slaves, men lost in shipwrecks, and even Grace Sherwood have all been rumored to be among the spirits that hang around this plantation home. Perhaps she enjoys visiting the plantation when no one is around to look at her statue, where she’s also sometimes spotted.

There are always those ghost stories out there that are hard to corroborate. One such story is that of the murdered Mrs. Woble, whose house sat along Elbow Road. Others claim to have spotted a little girl in the road who possibly drowned in the lake nearby.

The thing is, the curvy stretch of Elbow Road is prone to deadly accidents. It could be any number of souls lost along the road who haunt it now. Perhaps it’s the ghosts of Elbow Road causing the accidents.

From levitating ornaments to cold drafts, and a history of other strange occurrences, the Thoroughgood house is a lively place of spirits. It’s believed that at least one former resident took their own life in the home, which could explain the unsettling feelings some visitors and workers get when in the museum.

The Princess Anne Country Club is one of the most haunted places in Virginia Beach, though it has competition from the eleven ghosts at the Ferry Plantation and the ghosts at the final place on our list. Some of the ghosts at the country club are fairly docile, like the bride who frequents the bar area.

Unlike other local hauntings where people see a person in the distance, some of the ghosts at the country club seem to enjoy harassing people. There’s a group of ghostly men who like to chase off people walking the grounds. If you’re looking for a fright, this would be the place to visit.

The Cavalier Hotel has quite the history, with a who’s who list of famed guests since it was built in the 1920s. From famous actress Bette Davis to famed gangster Al Capone, the Cavalier Hotel has been a popular haunt for the living, but it also seems to attract the dead.

There’s at least one famous dead person known to haunt the hotel. The founder of Coors Brewing Company, Adolph Coors, fell to his death from one of the windows in the Cavalier Hotel in1929. While some believe Coors jumped, there is the possibility that he was pushed. However it was that he died; people have seen his ghost take that window dive over and over again.

Another common ghostly occurrence at the Cavalier is that of a young girl searching for her cat. Both the little girl and the ghostly cat have reported to be seen by guests and employees.

The Witch of Pungo

As far as Witch stories go, none is more popular than The Witch of Pungo, Grace White Sherwood.Take a step back in time to Colonial Virginia in the early 1700s, when witchcraft was to blame for e...
Read More

In the paranormal realm, there are few stories as creepy or unexplainable as the Portsmouth Poltergeist in Portsmouth, VA.Photo: Seattle TimesMany skeptics and seasoned paranormal investigato...
Read More

The ghosts of Ferry Plantation House make the property one of the most haunted sites in Virginia. At last count, the number of spirits occupying the parcel has reached 11, and undoubtedly they each h...
Read More
Loading....